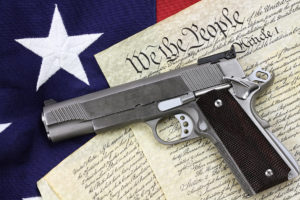 I’m a strong supporter of the 2nd Amendment, and as a state representative I’ve voted to uphold and expand our 2nd Amendment rights.

For example, I voted in favor of HB 2058, which specified that a valid license or permit to carry a concealed firearm issued by another jurisdiction would be recognized in Kansas while such permit or license holder is not a Kansas resident. The bill also allows individuals who are 18-20 years of age to apply for a Kansas concealed carry permit. I believe this is important, because many young women on college campuses in our state face threats from individuals seeking to harass or sexually assault them. I believe that young women on our college campuses should have the right to defend themselves against these threats. This important bill was passed into law, and I’m certainly proud to have voted for it.

Additionally, I will always oppose gun control legislation as a state representative, including red flag laws. These are laws that are essentially designed to take away guns from a dangerous person, before they can harm themselves or others. While this sounds good in theory, these laws violate our basic right to due process. These laws essentially turn our system of justice on its head, making everyone guilty until proven innocent. Under these laws, judges can sign an order allowing the police to confiscate the guns of a person deemed “dangerous,” and then that person must go to court and convince the judge that he/she isn’t insane, in order to get his/her guns back. This is completely contrary to the way in which our system of justice is currently structured, where everyone is presumed to be innocent until proven guilty.

The 5th Amendment states that “no person shall be deprived of life, liberty, and property without due process of law,” and red flag laws deprive people of property without full due process of law. In total, red flag laws violate the 1st, 2nd, 4th, 5th, 6th, and 7th Amendments of the Constitution. Anyone who advocates for red flag laws is essentially advocating the repeal of at least half of the Bill of Rights.  I will continue to strongly oppose these red flag gun confiscation bills in the future.