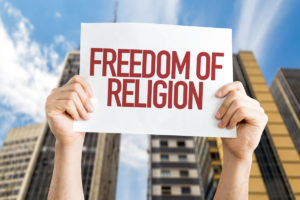 In recent years, religious liberty in our country has been under assault. The freedom of Christians and people of other religions to practice their faith has been under attack by secular progressives in America. For instance, in New Mexico a Christian photographer was recently forced by the New Mexico Supreme Court to photograph same sex weddings, and in Colorado, a Christian who owns a bakery store was forced by the Colorado Supreme Court to bake cakes for same sex weddings.

In these cases, the Christians who refused to participate in these activities were forced to undergo “sensitivity training” for having the audacity to stand up for Biblical truth and stand up for what they believe in. I strongly support freedom of religion for people of all religions, including Christians. In today’s society, secular progressives define “freedom of religion” simply as “the freedom to worship,” rather than the freedom to practice one’s own religion. I support freedom of worship and also support the freedom to practice one’s own religion, as long as practicing one’s religion doesn’t violate anyone else’s rights.

Refusing to bake a cake for a same sex wedding and refusing to photograph a same sex wedding doesn’t violate anyone else’s rights, as no one has a right to someone else’s goods or services, and same sex couples can easily find someone else to photograph their wedding or bake their wedding cake. As a state representative, I’ll fight to protect the religious liberties of Christians, as well as the religious liberties of people of all other faiths. All of us have the right to practice our religion freely under the 1st Amendment of the Constitution.